Episode 4 in which, much like the gay strip club in San Francisco that I once helped sew silver-lamé curtains for, there appear pouches, rings, devices for making perfect balls and some bent tips. After all ‘naaien’ which means sewing in Dutch is also a vernacular term for having sex.

This post wraps up everything that I have in my notions kit and to celebrate I’ve made a playlist to musically accompany read it. All of the songs have ‘notion’ in the title, except for the first one and you’ll hear straight away why it had to be included. I’ve weeded out the death metal tracks and a couple of others I just couldn’t take for diverse auditory reasons. Click the video and you’ll get the whole playist.

Oh yes, and I finally cover why I carry that lighter with me in my knitting kit.

#18 ZIPPER POUCH – where all the other stuff gets put. Crocheted out of yarn made from cut up plastic bags. Repurposing at it’s best and fondly referred to as “plarn”. It is made by The Invisible Sisters:  a livelihood project employing women in Metro Manila. I was in Manila regularly in 2013, on route to Ifugao where I was part of setting up Ricefield Collective. I love the way knitted and crocheted recycled plastic bags look, but personally find it quite an unforgiving process on my hands. I wouldn’t work with it as a hobby, so it’s nice to have someone who is earning some money from it make them.

#19 KEY RING – it’s a sheep and it dangles. It has no function beyond the immense importance of being decorative. It is softly strokeable and not vegetarian; being made from a little piece of sheepskin and leather. It’s the perfect dark red: a good reminder to myself that this (when done right) is one of my favourite colours. I got it at Ardelaine an amazing woolly cooperative in the Ardeche, in Southern France. In in 1975 they bought a defunct woollen mill and got it going again. Today they make wool clothes, yarn and mattresses which they sell in the shop. There is also a bookshop and a cafe that sells local produce. It can be found along a road that winds through beautiful country. My cousin’s son tipped me off about it when he gleefully told me that every kid on his school bus had vomited when they visited because the road was so bendy. It is absolutely worth the carsickness to go there! Wear your motion sickness bands, roll the windows down, eat ginger biscuits (or sweets) and stop regularly for the scenery. You’ll be extra rewarded if you go in lavender blooming or chestnut season.

When I visited with my aunt and uncle, we timed our arrival to coincide with one of the daily tours. We were shown around by Gerard, a founding member of the cooperative. Even those of us not so invested in all things woolly were enthralled.

That’s Gerard, talking to us about spinning.

#20 POMPOM MAKER – for quickly making the icing on the cake. You can make pompoms in many different ways. I like to think I’ve tried them all and then a new approach comes my way. There is nought wrong with cutting two same sized donuts out of a cereal box. That is how I made them throughout my youth and well in to adulthood. Of all the pompom specific gadgets I’ve experimented with, the ones from Clover are my favourites. They even make heart shaped ones, but I’m not going there. I have all the sizes for the round ones, even the giant one, but I rarely use it – it makes poms that are too heavy for the top of hats and require practically a full ball of yarn to make. It’s the medium sized yellow one that I carry around with me. It makes a pompom of around 4.5cm in diameter (depending how densely you wrap it and how much of a haircut you give it) which is perfect for the top of most hats.

#21 NEEDLE GAUGE – cause it’s hard to tell just by looking at them. A Susan Bates’ “Knit-Chek”: light weight and whatever, it’s a standard. I’ve been known to carry a second gauge that converts old English needle sizes to centimetre sizes too. I’d love one that combined all three. Even though the old English sizes are defunct, for those using second hand needles, they are useful to have included. I like the fact it has a built in ruler and the sizes are in a straight line. OK, yes, I totally have needle gauge envy with people who have cute shaped ones like this: 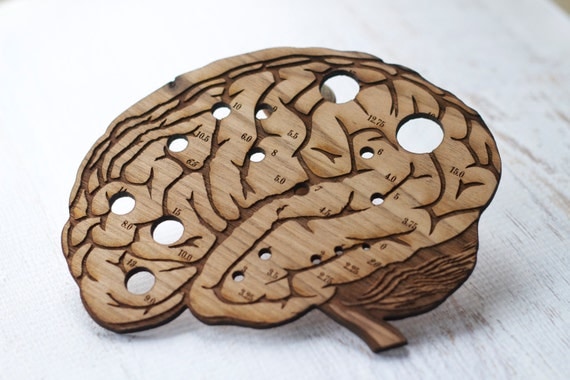 I wonder which needle size pokes through the lobe that controls visualising numbers, cause I’d like to give that one a poke. It would make pattern writing so much easier.

#22 FOLDING SCISSORS – for surreptitious scissor action. Their foldability keeps the points protected and are cheap enough that if they get borrowed or confiscated, I wouldn’t be heartbroken. I’ve had at least one pair in my possession since I was little. They are just so clever. I lost a pair of these while I was in the Philippines. It was the only thing I lost while I was there, even though I had been warned by nearly everyone who had been to or was from the Philippines that I would have everything I had with me nicked.

#23 SEWING NEEDLES – for stitching together knits. I like to carry needles in a range of sizes appropriate for different weights of yarn. I certainly prefer using a needle that is too big rather than too small. Mainly I use them for sewing in ends. In general, I love me some bent tip needles particularly for grafting. Clover is the easiest brand to find them from nowadays. I have three sizes, perhaps more exist, but these do me well. I also keep a few regular straight needles in there and even some with sharp tips. Usually you don’t want sharp tips, as it can damage the yarn, but sometimes they come in useful, like when doing a knotted steek. The needles are also called in to action for the likes of embroidery and repairs, and on the odd occasion to get the sim card out of my phone. I store them in item #16.

#24 LIGHTER – yes, to set fire to yarn and knitwear. Burning a little piece of yarn is a great way of getting a better idea of what the fibre content is when there is no ball band or label to tell you. I’ve never been a smoker or an arsonist. I’m not that great at using a lighter and have been known to burn my thumb when trying. I prefer matches (they smell nicer), but somehow it’s a lighter I carry around for when I want to test whether there is synthetic content in yarn. Briefly, if the flame burns bright and leaves a powdery ash that smells a little like burnt hair, it’s an animal fibre. It will still be powdery, but not as stinky if it’s plant based. If it’s plastic based, it will melt in to a hard blob. It’s hard to tell specifics of blends, but it will show if there is a synthetic in there. If you intend to try this while out charity shopping, it’s best to quietly snip a little bit off and step outside, rather than spark up inside and risk the fire alarm going off or worse still, the sprinkler system.

And that’s it, I think that may have gotten me over the hump of starting to blog. I shall try to make it shorter and snappier from here on out. Or maybe not. My plan for my blog is to have a place where I can go in to things at greater length than makes sense on my sweaterspotter instagram feed.